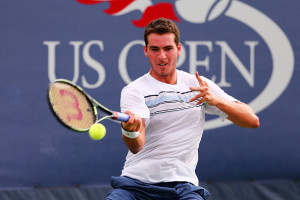 For most elite prep athletes the terms NCAA Champion, All-American, and Five Star Recruit pretty much clear a straight path to a professional career. All-American basketball players have agents lining up to represent them before they complete their one season college basketball career; consensus All-American football players can show off their skills to thoughtful scouts at pro days and combines; blue chip baseball recruits can be drafted before they are old enough to vote, but professional guarantees have not been the case with young, collegiate tennis talent.

However, as men’s professional tennis evolves, and athletes peak at later ages, NCAA and collegiate tennis is becoming a more viable and productive option for young players. Ryan Shane is one of the collegiate players helping to turn the tide and stigma of college tennis. Shane has been one of the most decorated college players of the past 2o years. A 2015 NCAA Singles Champion, a key member of two NCAA Team Champions at the University of Virginia, a recipient of All American and ITA awards, Shane has successfully navigated NCAA tennis. Having used his college tennis to test the waters of professional tennis, Shane now finds himself on the cusp of a full time pro career– a potential career that has been long in the making.

When Shane was a kid watching his dad and brother play tennis on the green clay court in the backyard of their Fairfax, Virginia home, he wasn’t thinking about a professional tennis career. He was simply playing tennis, trying to emulate his brother, and have fun with his dad. But right away Ryan’s father Jack noticed something special about his son,

“He was an extremely fast learner. We just had to show him a technique once and he picked it up immediately.” Jack also says his son was always naturally strong,” Jack said. “He had an overhead at the age of 7.”

His dad soon entered him in a local tennis academy, and that raw ability began to become acute skill. As Shane advanced through the junior ranks, his father would emerge as an important figure in helping to build his future collegiate and professional aspirations.

“I had my dad who was always there for me, pushing me to play and encouraging me every step of the way. If I didn’t have my dad I do not think I would be where I am today. It wasn’t until my early to mid teens that I really fell in love with tennis and realized this is what I wanted to do. However, if I wasn’t being pushed by my parents, I think it would have been too late for me to have a chance at making it in the professional world,” Shane says of his father and mother.